More Reasons Why I Live Here

While known for our rainy days, the overcast days when it isn't actually raining 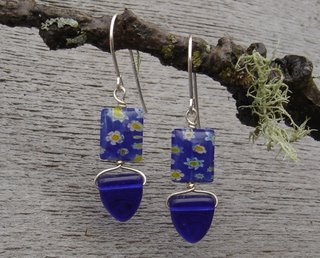 are perfect for photographing jewelry outdoors. I took this picture a few days ago on one of those perfect days. It was warm enough to just wear a long sleeve shirt. The sun was completely blocked out by the thick clouds and the rain held off all day giving me some great pictures. These are our Cobalt Blue Millefiore and Triangle Glass Earrings. 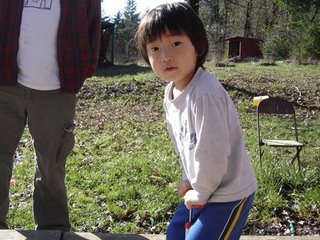 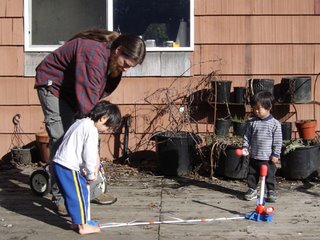 The other reason I love living here is the little known incredible weather in February. In between the rains we get beautiful warm sunny days that have that West Coast California feel to them. Yesterday was one of those days. Nick took out the Air Pump Rocket that he had just purchased at the thrift store and the boys had big fun making the rocket fly up into the air. Unfortunately one of the rockets will probably be a permanent fixture on the roof of our carport. Henry decided to start calling his brother his "Butler" because Max happily retrieved the rockets and put them back on the launcher while Henry got the pleasure of pumping. Team work!
Posted by Felice Luftschein at 7:23 PM No comments:

Why I Live Here 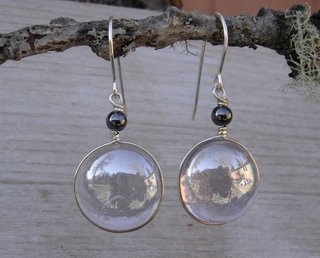 These Hint of Lilac Irridescent Earrings were the big seller of the past week. They are a classic example of our simple glass earrings line in which we cut a groove around the edge of the glass cabachon and then wirewrap using the groove to provide a secure grip on the slippery buggers.
The overall health in our household has been improving. Max is over his blister filled mouth disease. We had a pink eye scare on Valentine's Day but it turned out to just be a scratch on his lower eyelid. I continue to cough but not quite as often and it doesn't wake me up at night. Nick is seeing an improvement in his cough as well. So things are looking up.
We had a grand life affirming experience today. Although still feeling exhausted but more like the general exhaustion of being 40 something parents of two active young boys, we dragged ourselves out of the house to do some errands. We were able to go to the Post Office, pick up a prescription and get my drivers license renewed at the local DMV all in 40 minutes. I can only imagine the ordeal the DMV alone would have been if I still lived in Brooklyn.
We have disturbing memories of our visit top the DMV in Brooklyn about 18 years ago when we lived in my parents basement (like Gloria and Meathead). It involved a Kafka -esque journey through the rings of hell with a serpentine line up of hundreds of people crammed into a dingy warehouse officebuilding. I seem to remember one of us having to leave repeatedly to keep feeding the parking meter. We were met by an indifferent zombie servant when we finally made it to the appropriate window who I was glad did not eat us or send us on to a different line.
In contrast the Corvallis DMV was on a quiet little side street built just for the DMV. It had a roomy empty parking lot. Both children had conveniently fallen asleep so Nick got to take a nap in the car too. (Another thing I probably wouldn't attempt in downtown Brooklyn). I entered the building at 2PM and took a number (17) . They were on 13 when I arrived. I was quickly called, paid the fee, said yes I am still the same height and weight as I was in 1991 (one of which was a small lie) and was out the building by 2:12PM with a new hideous photo of myself on my new drivers license.
And that's why I live in Philomath Oregon.
Posted by Felice Luftschein at 9:12 PM No comments:

It's been quite a while since I last blogged because we have been constantly busy and completely fatigued due to an evil virus that has invaded our household. Poor little Max has been stricken with a virus that has created horrible bloody open blistery sores in his mouth. There is nothing quite so unnerving, stressful and sad as to see your sweet happy little toddler screaming in pain every few minutes as he obsessively chews down on the wounds in his mouth. He has literally fallen to the floor in pain. But he's such a good natured guy that after the moment passes he gets back up and continues playing happily until the next burst of pain occurs. The only cure is time and pain killers to help relieve some of the suffering. Nick and I have our own versions of this virus in our throats. I have been coughing for what seems like every few minutes for over a week now. This is after I had finally gotten over my 2 month cough. My doctor told me "now that you are older -no offense- it takes longer to get over these things." Thanks.
Henry hasn't caught it yet and has been annoyed at how lame we all are. He said he wishes he had another Mommy, Daddy and Baby who aren't sick.
Yet we have been quite productive and have had good sales on Etsy and elsewhere. Nick has been working on all sorts of cool stuff that you see on his blog.
One of our best sellers this week has predictably been these Red Millefiore Hearts with Fresh Water Pearls Earrings: 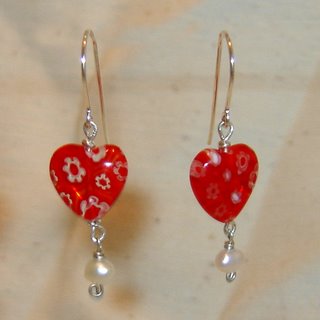 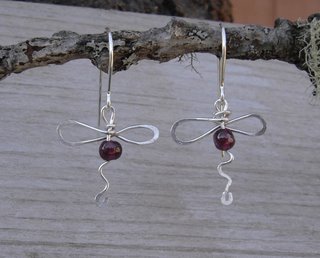 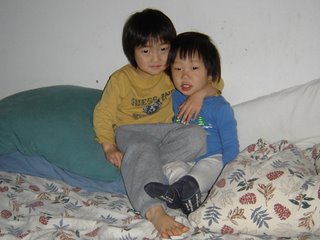 The other dragonfly earrings were a creative burst I had recently. They haven't sold yet but I still like them.
Here's a picture of the happy loving brothers. They get along well most if the time, when they aren't pounding on each other.
Now I shall return to my hacking cough and phlegm production.
Happy Valentine's Day! (wanna kiss?)
Posted by Felice Luftschein at 12:27 PM 4 comments: