Our Family Vacation to Albuquerque 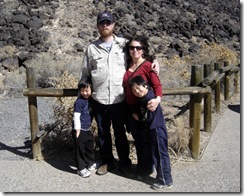 We took our first big family vacation this past week to visit my parents who live in Albuquerque New Mexico. My brother and his family met us there too. 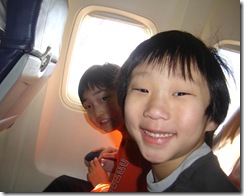 It was Max’s first time on a an airplane.Unfortunately the turbulence was extreme the entire flight. It got even worse as we landed in Albuquerque during hurricane force winds.The kids started goofing around yelling “We’re going down! The wing is falling off!” Funny yet not so funny.The plane was rocking from the wind even after we landed and were disembarking. 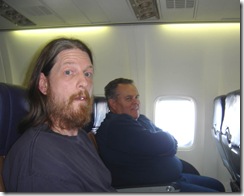 This is Nick in full on flying anxiety mode. He is chomping on gum while trying not to whimper like a baby in front of his new friend Fred from Southie who was entertained by Nick’s constant chatting. 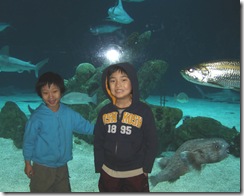 Albuquerque has an excellent aquarium. 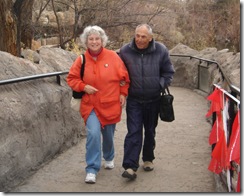 Mom and Dad aka Fran and Joe at the zoo. 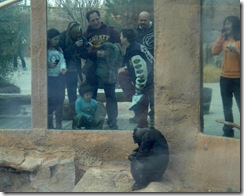 My family watching the chimpanzees. The chimps came right up to the window and plopped themselves down right next to us. We were maybe a foot away from them on just the other side of the plexi glass. 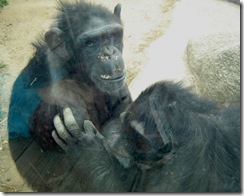 She then began to work on popping her man’s zit while their baby played. Then they gave each other a big hug. We took the train through the Bio Park from the Aquarium to the Zoo. 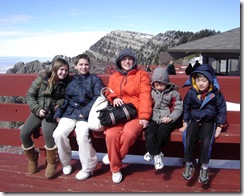 The next day my Mom and I took the 4 kids on the Sandia Tram. The weather was perfect, calm and clear. 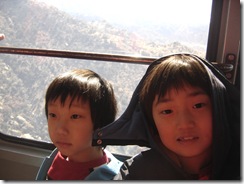 Henry and Max enjoying the view on the tram. 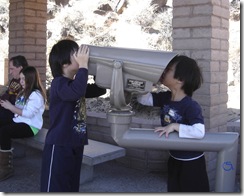 The next day we went to the Petroglyphs National Monument. 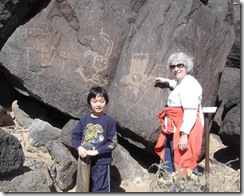 It was hard to tell which were the real petroglyphs and which were the graffiti made by the stupid morons who thought they should deface them for all posterity. 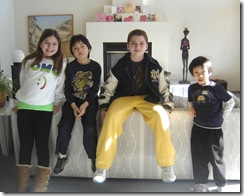 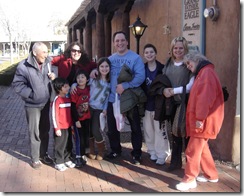 Nick took this picture of all of us in Old Town.

Now we are home and catching up on work. Both of us have colds and are exhausted while the kids continue to run around like maniacs. 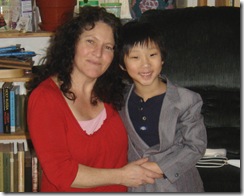 My sweet little Max wanted to get dressed up for his kindergarten class Valentine’s day Party.We got this perfect little suit at Goodwill for $8 a couple of weeks ago that he really liked. 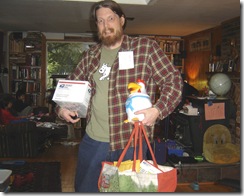 Nick is on the way out to do errands. He has our packages to bring to the post office, checks in his front pocket to deposit at the bank AND our change chicken. What’s that you may ask? Doesn’t everyone have a change chicken? My lovely mother–in-law gave us the chicken that is actually supposed to be a cookie jar. It says “cock a doodle doo” randomly when you lift it’s head to open it. We use it as a change jar. Well it was filled to the brim so it was time to cash that sucker in. Hilarity always ensues when we bring it in to the bank. Our small town bank still uses a change counting machine.Sometimes you can hear the chicken singing “cock a doodle doo” in the back room as the change is being poured into the machine. Good times.

Recently my glass bead supplier stopped carrying the dark purple version of these lovely Czech glass flower beads that I use. So I bought a bunch in the lighter color that they had. This meant I had to take all new pictures. So that’s what I did. 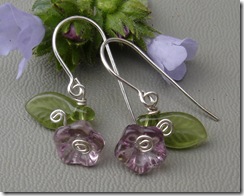 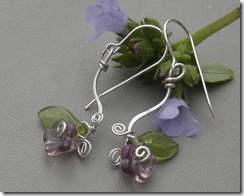 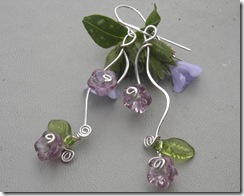 Posted by Felice Luftschein at 3:55 PM No comments:

I’ve been working on my plan to make all or most of our designs in copper and brass and add them to our Etsy shop.I added these yesterday. 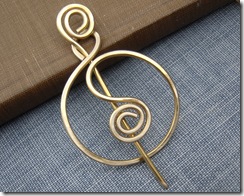 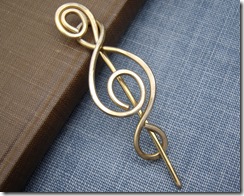 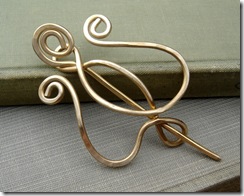 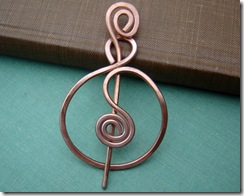 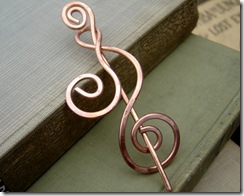 I was experimenting with some new books to use as props for the photos. Nick was sick in bed that day with a cold and I didn’t want to wake him up and get the usual books I use that I keep in the bedroom. Luckily our house is overrun with books as anyone who has seen it will attest to. So I was able to come up with some new variations on my theme.And once again it was a perfect overcast day for taking photographs with my particular camera too.

Posted by Felice Luftschein at 9:46 AM No comments:

I’ve been a busy little beaver adding lots of copper and brass into the shop. This week in keeping with the Valentines day theme I added these Spiral Love Heart Pins and the Pendant. 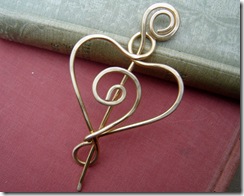 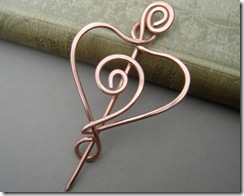 It’s been a whole new learning experience working with copper and brass. They are significantly harder than silver and aluminum which makes the noise louder when I hammer the wire. I’m kind of a weirdo and like hammer with my little anvil on my thigh. I realized that after a few months of doing this with the copper and brass that my thigh was feeling sore. I am probably slowly chipping away little fractures into my thigh bone. So I now put a bunched up sweater on my thigh under the anvil to buff the blows of the hammering. Nick tells me that jewelers in India traditionally use their legs to work metal with so I’m probably not all that weird.It just feels like a natural more controlled way to manipulate the wire than hammering on a bench. And less noisy. 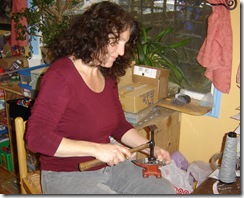 Posted by Felice Luftschein at 5:27 PM No comments: