I've added 2 new earrings to our Etsy shop. Once again they are based on older designs and really just needed to be made in sterling silver as earrings. 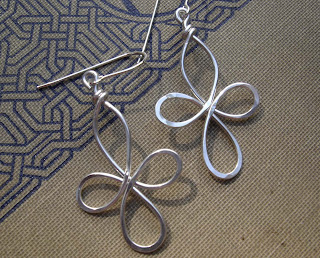 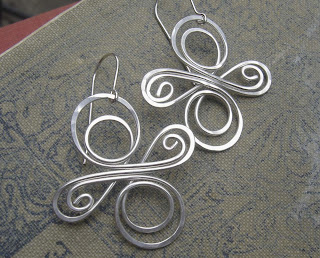 Celtic Knot Infinity Swirl Cross Sterling Silver Earrings
$22.50
I needed to charge more than I usually do for our sterling silver wire earrings for these because they are really tricky to make match and they actually use a lot of wire. I don't expect them to sell quite as well because of the price but I've got to be realistic about my time and cost of materials for my products if I want to make a living.
Yesterday was a decent day at Saturday Market. It was very busy with the Eugene Track and Field competition and the beginning of the Bach Festival in town and the weather was lovely warm and sunny. For a while it seemed like customers were mostly looking and shopping around before making their decisions but in the end it added up to a good enough day.
This week the kids start their swimming classes and our full on summer of long days of sibling fighting and boredom sets in.
I'm rethinking the camp thing...
Posted by Felice Luftschein at 5:54 PM 1 comment:

Last week I took our 6 year old son on a trip to Long Island, New York to visit my brother Steve and his family and celebrate my parent's 50th wedding anniversary.
We had a little journey through United Airlines circles of hell in which our first flight from Eugene was delayed due to "weather conditions" in San Francisco that looked sunny and delightful when we finally arrived with 5 minutes to spare to make our next flight. Apparently those 5 mintues where not enough to keep them holding their own flight and so they gave away our seats. We then stood on the customer "Service" line for about an hour and half with about 75 other disgruntled passengers with their own tales of airline woe while watching the plane we should have been on sit on the runway delayed for an hour. Henry behaved impeccably (I must be a great parent) the whole time on line. We managed to get stand by on the next flight and screw the next slightly late passengers out of their seats. I assume this process goes on infinitely as each flight takes seats away from those slightly late in a sort of Pay It Backward process of airline karma.We arrived at 1:30am in the morning at JFK and my loving brother and mom and dad were there to greet us.
The next day began with this lovely NY breakfast-the bagel and cream cheese with lox. 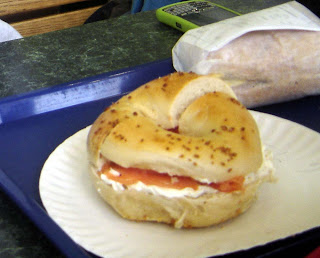 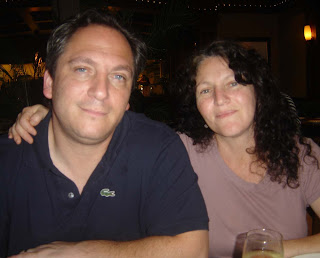 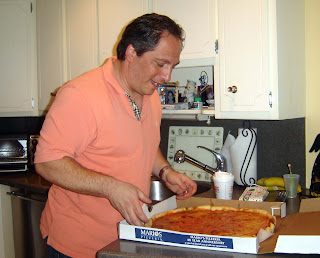 Now that's a pizza! Finally the pizza you just can't get in Oregon. It has the light thin crust and the oil dripping down your hand. 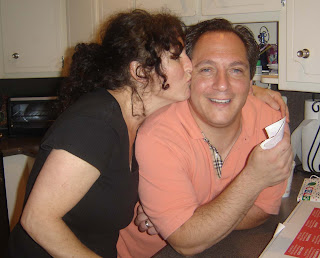 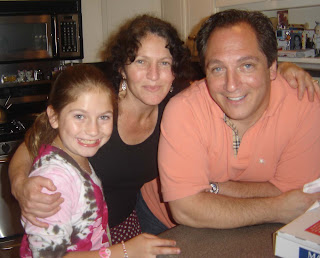 It was so great to meet my wonderful niece Jamie!
The next night was my nephew Matt's 12th birthday party that he shared with his good friend Jason. It involved 50 12 year olds and a large lovely swimming pool with a hot tub. There was an air brush artist making t shirts and hats and a movie screen set up outside and the grand finale of the Mr Softee truck in the driveway with free ice cream cones for all.Henry got to go in the truck with his cousin and play ice cream man. Unfortunately my little 6 year old thinks he can actually swim. So there he was on his little floaty noodle thing kicking out to the deep end constantly to join in with the all the big kids. I was left with the only reponsible parenting option of putting on my bathing suit and going in there too. So I was the only adult at the party baring it all in a bathing suit amongst all the kids. 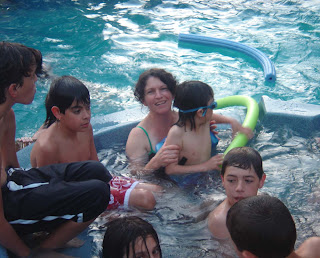 Here I am in the hot tub with a bunch of 12 year old boys. Need I say more? 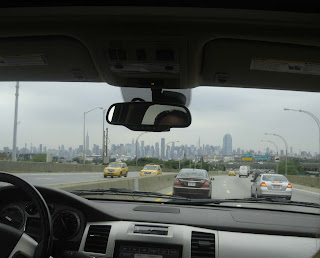 The next day we drove into NY and went to the Museum of Natural History. 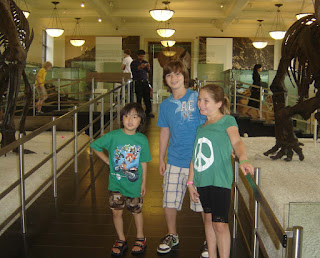 Henry , Matt and Jamie taking it all in. 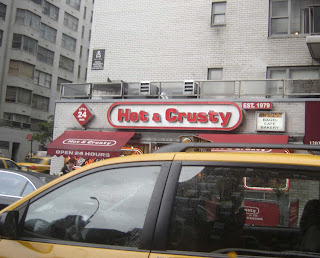 While sitting in traffic this just cracked me up for some reason. I guess I am just easily amused. 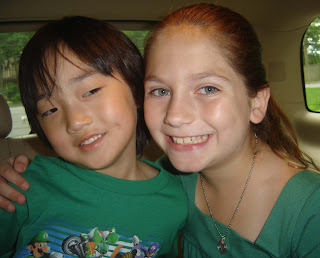 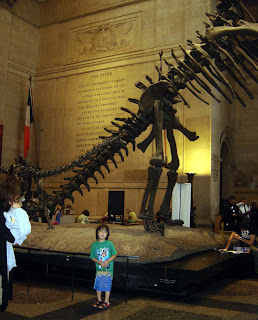 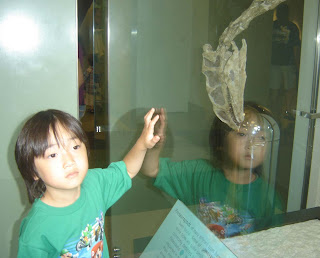 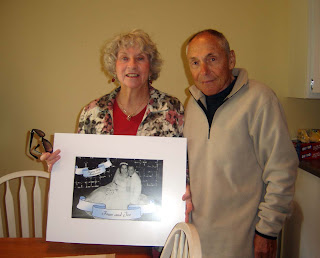 The next day was my parent's 50th wedding anniversary. My brilliant sister-in-law came up with the plan of stealing Mom's photo album and having this board made for everyone to sign. 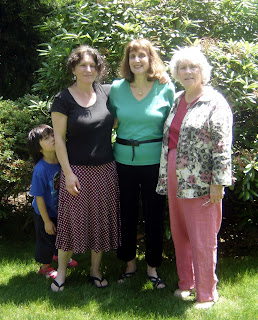 I got to see my Great Aunt Phylis. So this is Felice, Phyliss and Fran. Try saying that 5 times fast.We had lots of old family friends show up and a good time was had by all. 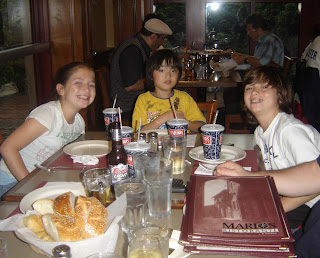 We all went out to dinner at Mario's for excellent Italian food the last night we were there. 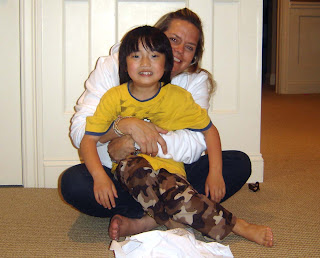 Aunt Michelle getting some good hugging in with Henry. 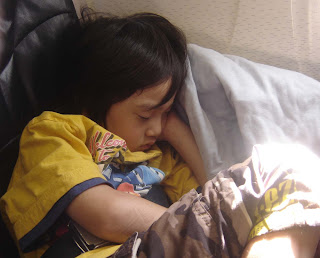 Henry fell asleep on the last plane ride home. He never napped on any of the other plane rides. He later woke up screaming as we were landing with a bad dream and a headache but quickly recovered upon landing.
It was a great trip. 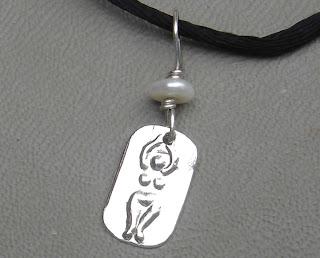 I've added some new items to our shop in the past week or so. This is a really old design I made back when I had time to sit and carve by hand in reverse our steel dies. We call this one:
Fertility Goddess Woman and Pearl Sterling Silver Pendant 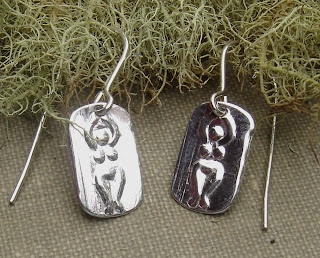 and the matching earrings: 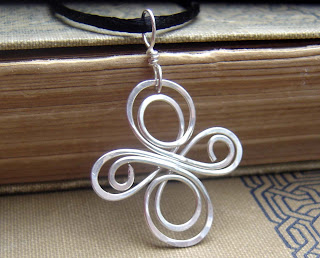 This is another old design that has been made smaller and in sterling silver and just added to our Etsy shop:
Celtic Knot Infinity Swirl Sterling Silver Cross Pendant 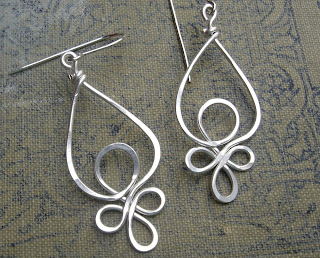 And this is another old design that I reworked:
Celtic Loops Sterling Silver Earrings
I make this large and bold in aluminum and tiny and sweet with a little iolite bead in sterling silver. A customer asked for it to be larger but in sterling silver. Duh! why didn't I think of that?
On the home front our old friends,the neighbors goats and Mama Llama are back visiting with us for the summer to eat all our nasties.Welcome back girls! (or are they boys? I can't remember.) 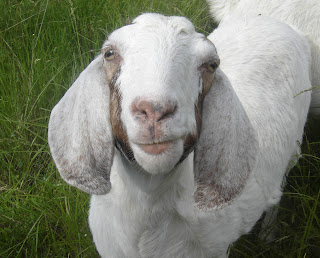 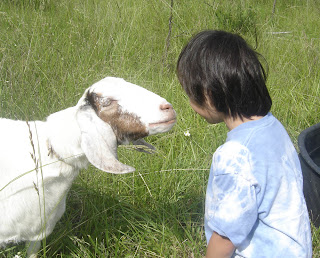 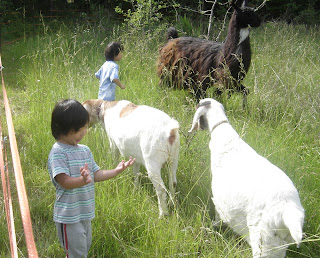 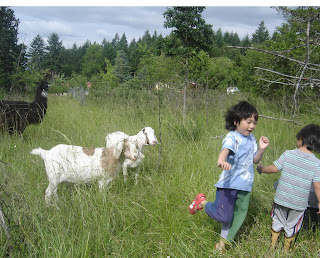 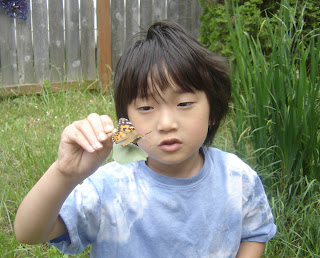 We ordered caterpillars again for our butterfly tent this spring. They quickly made their cocoons and emerged as butterflys. Henry hates to say goodbye to them. 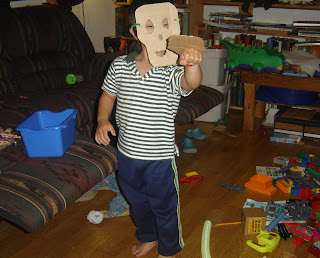 Here's another quick and silly barely crafty easy toy Max came up with for me to make. He says it's the terminator guy.Cardbaord, pipe cleaners and scissors and you too can have a quick crappy toy for your 4 year old little dude. 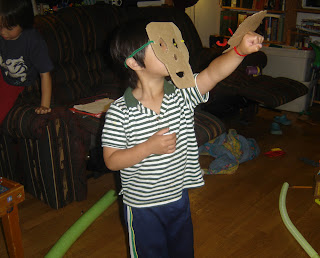 Henry and I are going on a short trip to Long Island NY next week to visit my brother and his family and celebrate my parent's 50th wedding anniversary. I haven't been back east in about 10 years. I can't wait to eat some good NY pizza, bagels and chinese food and see family I haven't seen in a very very long time.I'm hoping Max and Nick are not scarred for life.